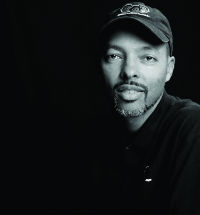 The Sacramento Public Library in partnership with the California State Library presents: Newbery Medal Winner Jerry Craft. The Artist’s journey from being a reluctant reader to a published author/illustrator.
Jerry Craft is the New York Times bestselling author and illustrator of the graphic novel New Kid (Quill Tree Books). In 2019 New Kid became the first graphic novel to win the Kirkus Prize in the “Young Readers’ Literature” category. A few months later, it won the 2020 John Newbery Medal for the most outstanding contribution to children’s literature. It is the first graphic novel in the Newbery’s nearly 100 year history to receive the award.  Craft is only the fifth African American author to land the coveted prize. On the same day, New Kid was also awarded the Coretta Scott King award for an outstanding work by an African American writer. Craft is the second person to have simultaneously won both awards in the same year. Craft’s companion novel to New Kid, Class Act (Quill Tree Books), was published in October 2020.
Register here: https://us06web.zoom.us/webinar/register/WN_sHDDKE7YTa2fjEo_7gEhUw
Arrangements for the appearance of Jerry Craft made through HarperCollins Speakers Bureau, NY, NY.This project is supported in whole or in part by the U.S. Institute of Museum and Library Services under the provisions of the Library Services and Technology Act, administered in California by the State Librarian.